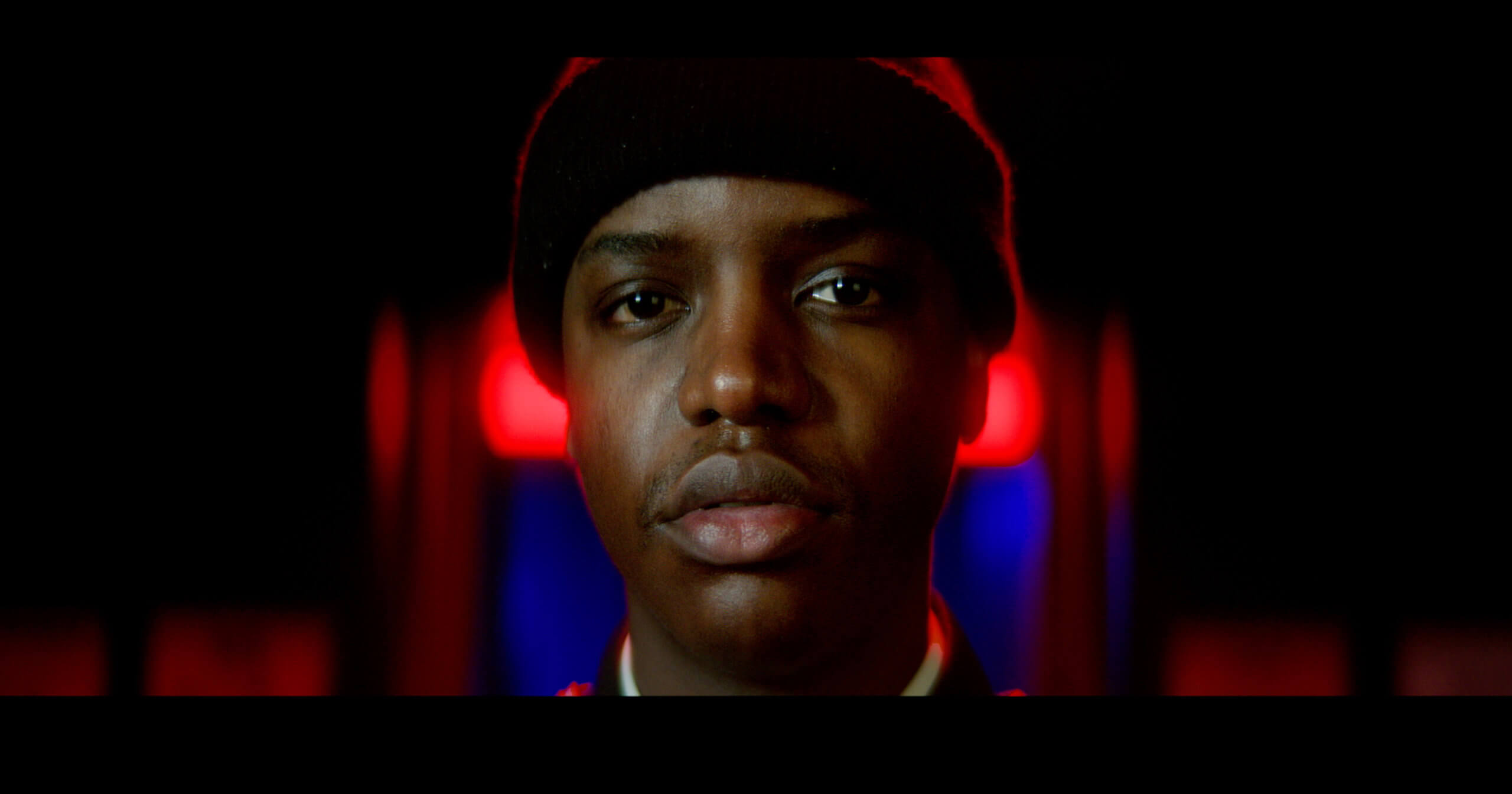 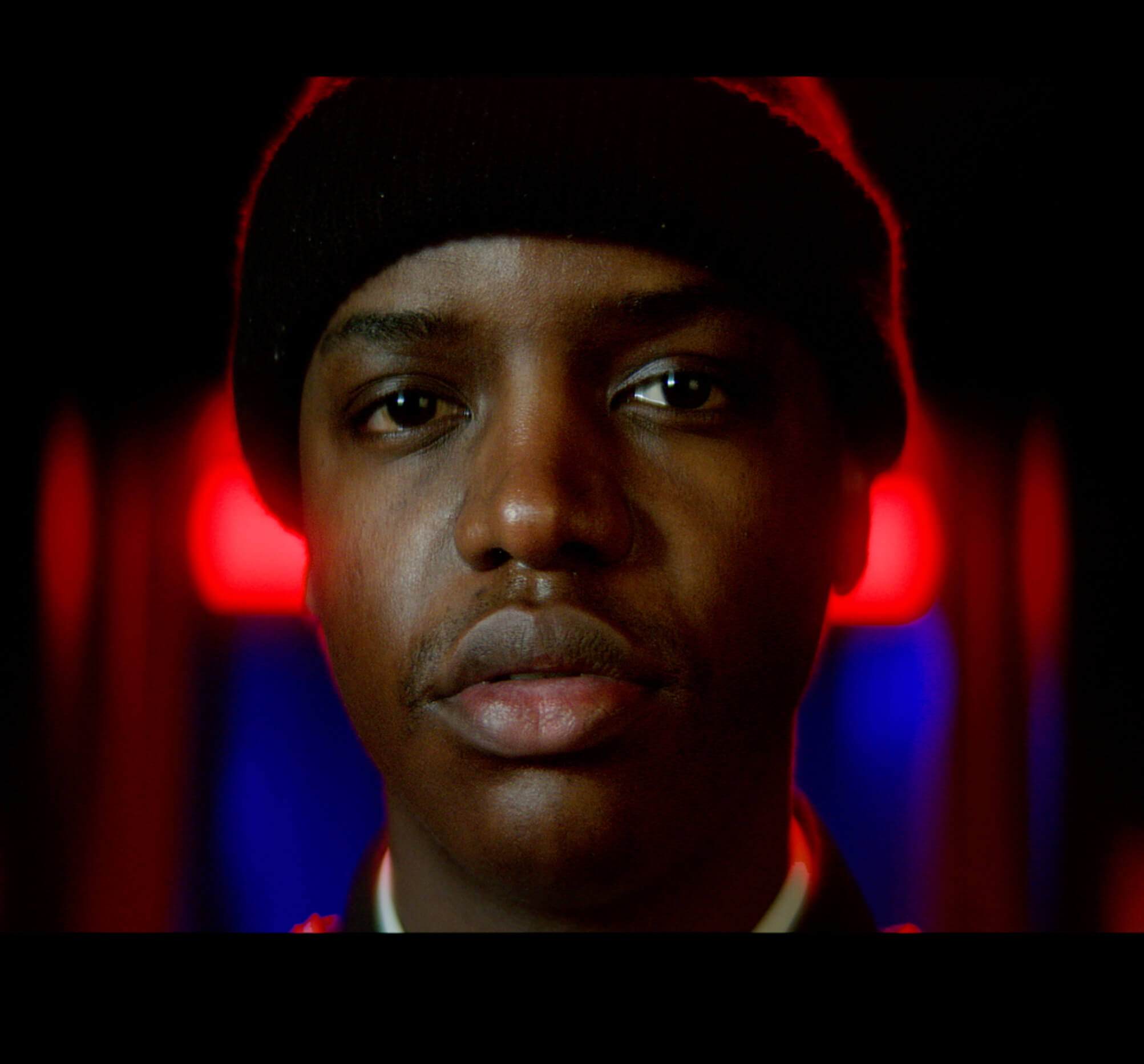 “You don’t belong here, go back to your own country.”

Shocking, but real abuse experienced by victims of prosecuted hate crime in Wales. This was the inspiration for our ‘Hate Hurts Wales’ campaign.

The Hate Hurts Wales campaign objective was to tackle hate crime, calling victims, bystanders and everybody in Wales to stand up to hate crime together.

To achieve this, our aim was to raise awareness of what a hate crime is, encouraging people to report, as well as highlighting the consequences of committing a hate crime, sending a message to perpetrators that they won’t get away with their hate. Ultimately, together we can put a stop to hate crime.

There are five key characteristics protected by hate crime laws: race, religion, sexual orientation, transgender identity, and disability. The campaign featured each one, based on real-life stories of abuse suffered by victims of hate crime in Wales. Hostile, shocking verbal and online abuse put the spotlight on prejudice. It ‘hurts’ to watch and to listen, compelling the audience to experience hate from the point of view of victims. It shows that hate hurts everyone, our communities and Wales.

The TV ‘hero’ advert featured close up shots of victims, when we can hear the abuse victims experienced, then cutting to flashbacks of their hate crime events (re-enacted CCTV footage). It gave first hand insight into what they went through building empathy and outrage in the public. It empowered victims and bystanders to stand up to hate crime.

‘Hub’ films were also produced, further expanding on each of the hate crime stories featured on the ‘hero’ TV advert, to be shared and promoted online. The five individual films provided further understanding on the impact hate crime had on the victims (as well as consequences to perpetrators), encouraging victims and bystanders to report hate crime to help stop it, and create a better community for everyone. 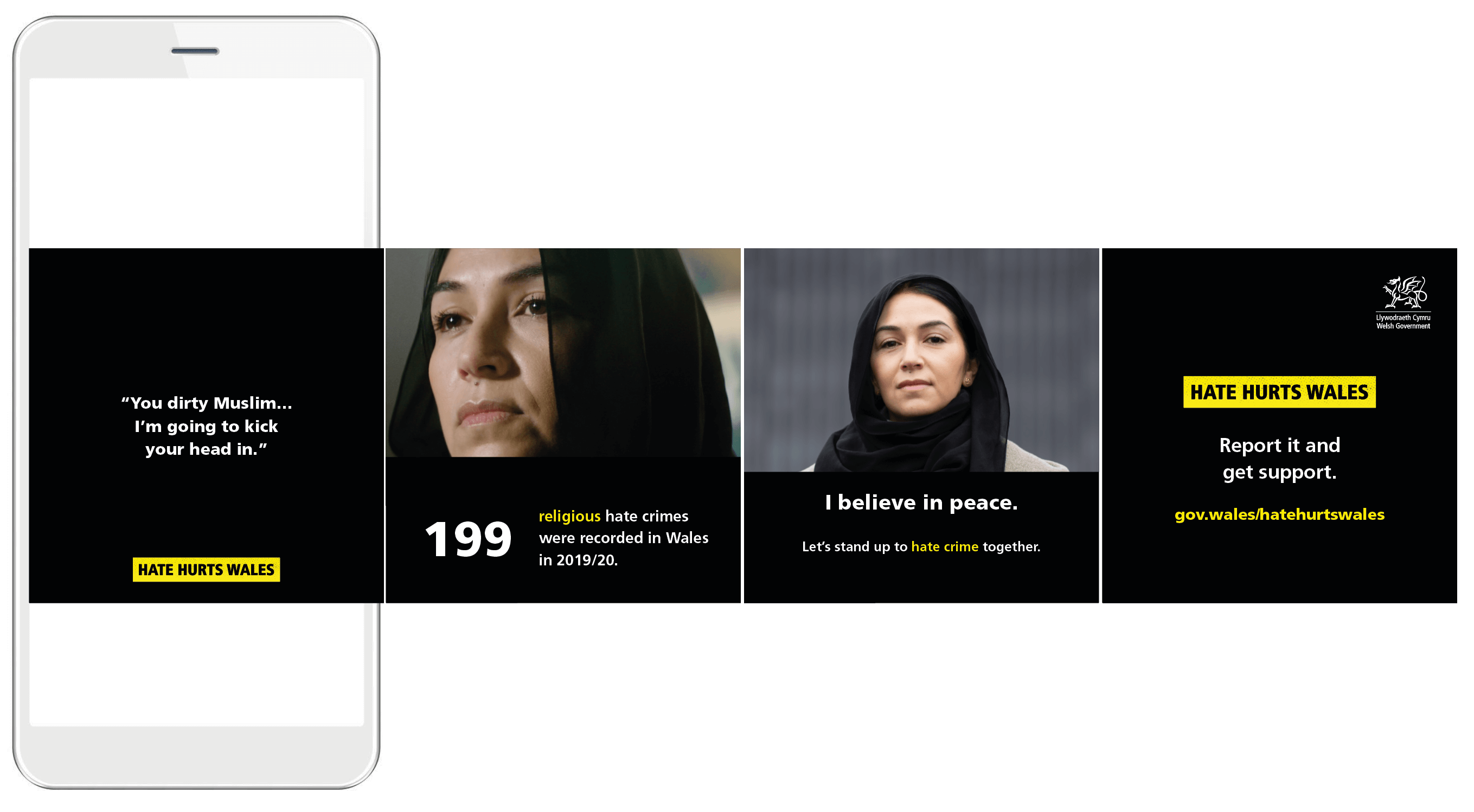 This was a bilingual, integrated pan-Wales public awareness campaign. The first campaign burst was live in March 2021. The 60-second advert was aired ITV Wales, Sky Adsmart and S4C. The hub films were shared and promoted online (display and search), on social media channels and YouTube with the hashtag #hatehurtswales

The campaign and TV advert were featured on ITV Wales News headlines when the campaign was launched (9th March): https://www.itv.com/news/wales/topic/hate-crime 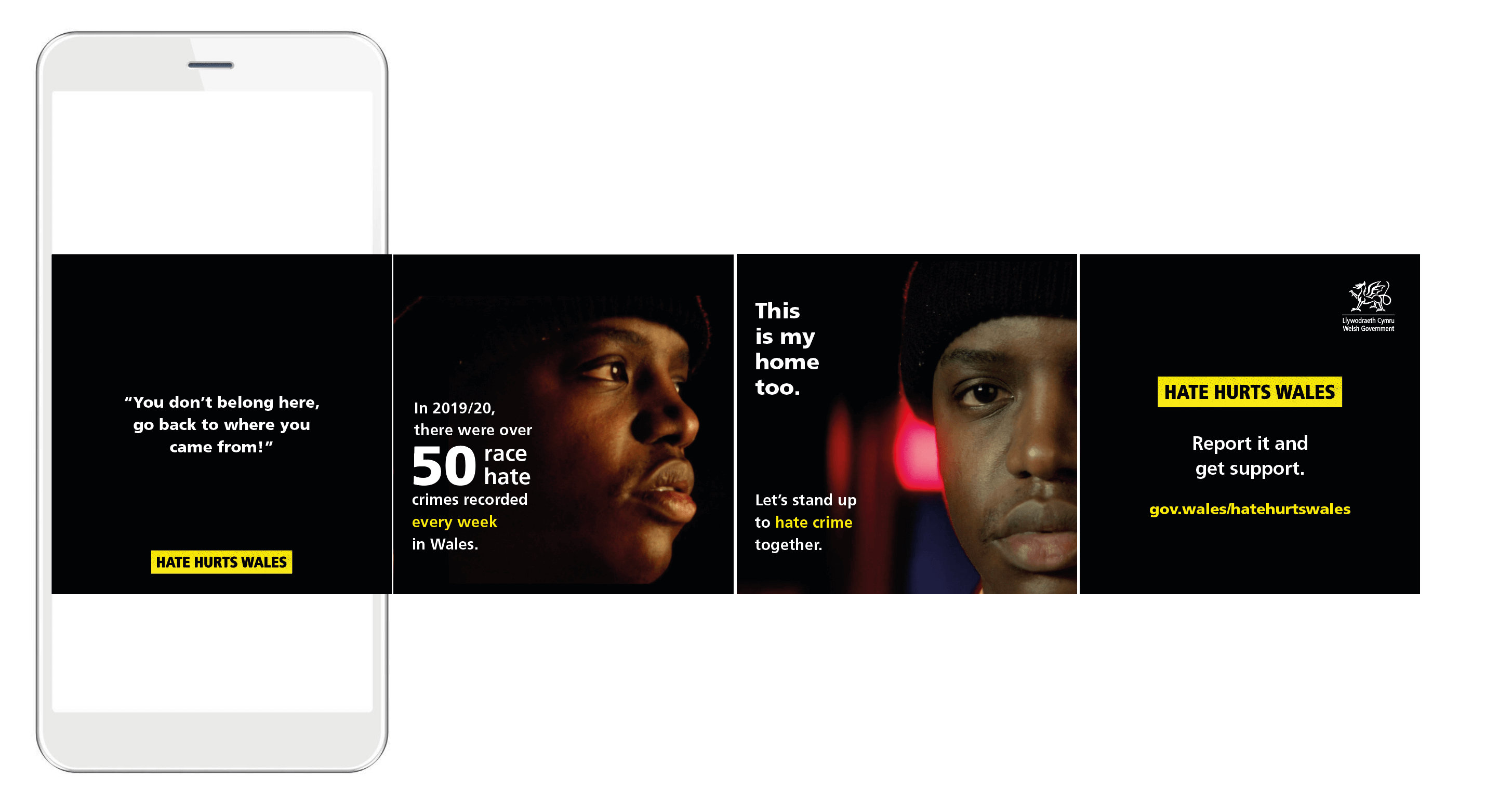 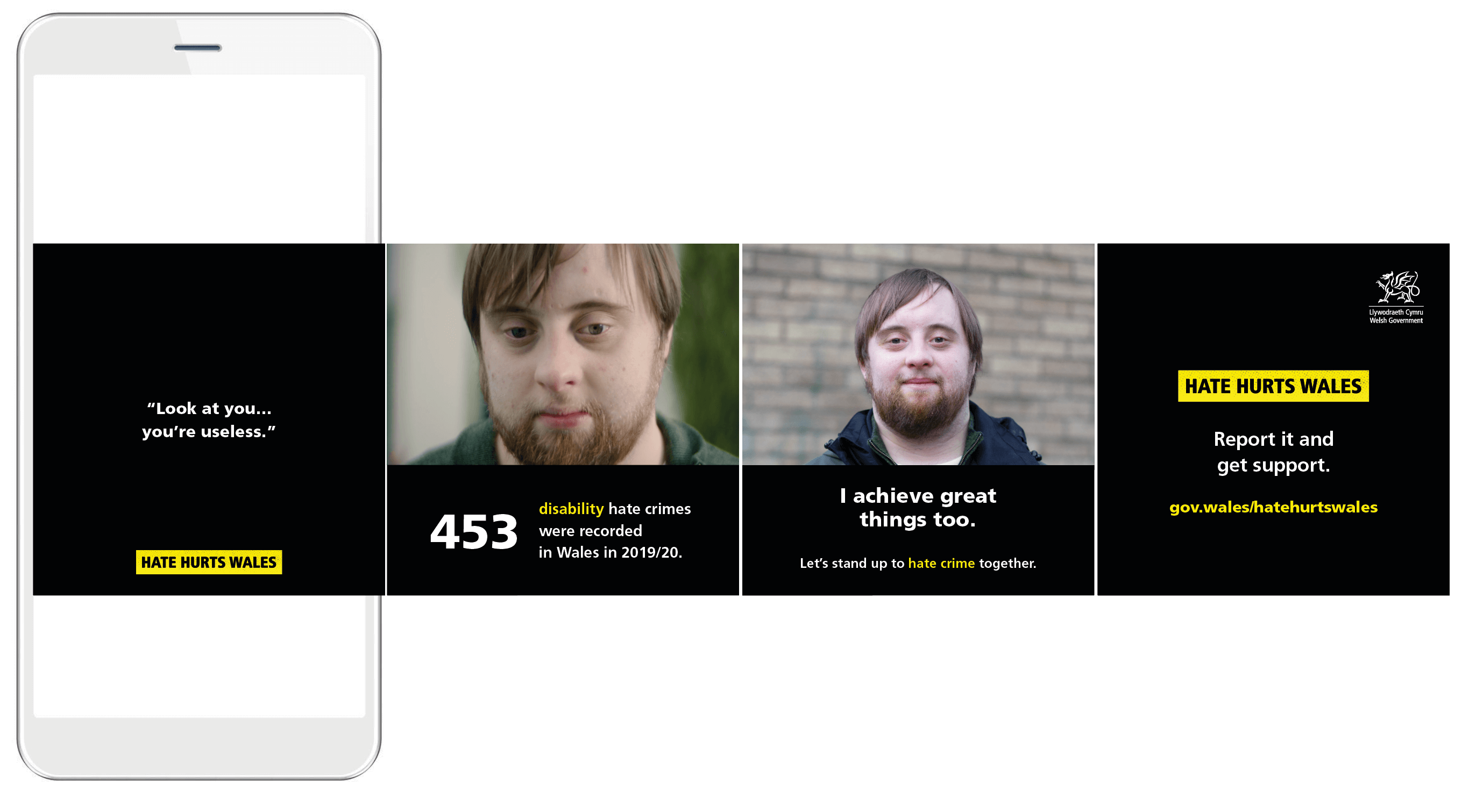